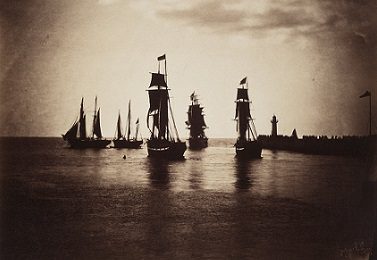 Gustave Le Gray is undoubtedly one of the most important photographers of the  nineteenth century. Born outside of Paris in 1820, his early training was in painting; therefore, it’s not surprising that Le Gray favored the grand scale of landscapes and seascapes. However, much of his fame came in the early 1850s when he was chosen to participate in the Mission Héliographique, a project to document French monuments and architecture before restoration could begin.

The irony of restoration, as John Ruskin frequently lamented/stormed, is that it often involved destroying original masonry and sculptures, replacing them with modern reproductions.While no technology (and certainly no technique available in the mid-nineteenth century) could respectfully restore ancient monuments, Le Gray’s photographs went a long way towards  preserving  them, or at least images of the original for future generations to admire.

Le Gray was not only an active photographer, but an innovator as well, experimenting with techniques and technologies to improve photography. Louis Degeurre’s silver-plate process allowed for sharp details, but it was expensive, cumbersome to transport, required long exposures, and involved hazardous chemicals. Henry Fox Talbot’s calotype process used a paper negative, which was not only easier and less expensive, but also had the advantage of producing multiple prints from a single negative. One significant disadvantage of the calotype process, however, is that the paper was more vulnerable to absorption, unlike daguerreoytpe’s glass plates, leaving blurred edges with fewer crisp details. Le Gray’s solution was to treat the paper negative with wax, resulting in much more vivid photographs.

Le Gray was also an early innovator of “combination printing,” in which multiple negatives are used to print a single photograph.  Bateaux quittant le Port du Havre (Boats leaving the Port of Havre), 1856, shown above, is one of Le Gray’s many seascapes produced using this process. Because of the different exposures required to capture the dark shades of the sea and the bright light of the sky, Le Gray took two photographs and combined the negatives. The result is a deeply evocative chiaroscuro effect, in which the soft ripples of the sea, the clean lines of the ships, and the rich light shining through the clouds are all visible in a single print. Soon, Le Gray began teaching this and other photographic processes in his Paris studio, and though it later proved financially disastrous, his pupils, including Nadar and Maxime du Camp, became the leading figures in nineteenth-century French photography.

Le Gray frequently wrote about his experiments, as well as his philosophies on art. One question that dominated the discourse around photography was whether or not the camera was a scientific apparatus to accurately and objectively document “truth,” or whether photography was an art form in its own right, embracing creativity and subjectivity as part of its own particular aesthetic. Despite his frequent experiments and his involvement with the Mission Héliographique–which above all else was an endeavor to scientifically catalog and categorize French tourist sites–Le Gray was most interested in the aesthetics of photography. In his 1852 treatise, Le Gray wrote, “It is my deepest wish that photography, instead of falling within the domain of industry, of commerce, will be included among the arts. That is its sole, true, place, and it is in that direction that I shall always endeavor to guide it” (qtd. in Daniels). Photography still straddles that odd middle-ground between technology and aesthetics, but while we might admire Le Gray’s contributions to the science of photography, it is his use of light and shadow that captures our eye and imaginations.