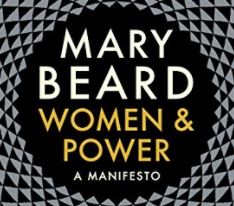 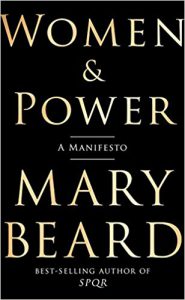 The subtitle of Mary Beard’s new book Women & Power is, provocatively, A Manifesto.  But, as manifestos go, there’s nothing really radical about it. There are no lengthy enumerations of grievances, no definitive calls to action, no sparks of revolution. Beard doesn’t follow Tristan Tzara’s dictum that: “To put out a manifesto you must want: ABC/ to fulminate against 1,2,3.”  Some reviewers on Amazon, GoodReads, and elsewhere have complained that there’s nothing new or particularly enlightening about Women & Power, that it’s all been said before by Rebecca Solnit, and, apparently, doesn’t warrant repeating.

Despite its title, Women & Power isn’t really about women in positions of power, but rather about women’s power to speak, to take or claim an authoritative and public voice, and how often that voice is silenced or undermined. The book opens with a scene from The Odyssey, in which Telemachus tells his mother, Penelope, to go back to her loom because “speech will be the business of men.” Beard follows this theme through examining Classical examples in which women’s tongues are cut out and/or their heads cut off to prevent speech. This, Beard shows, is a metaphor for all the ways in which women are silenced at work, for instance, or publicly harassed on Twitter. Beard is no stranger to these attacks herself, having been frequently mocked and threatened by both misogynists and white supremacists, simply because she is a woman speaking in public.

Because only men were allowed to speak, Roman women who dared defend themselves in court were androgynes and/or denied their womanhood: “A Woman speaking in public was, in most circumstances, by definition not a woman.” And because this historical practice continues, in the ways in which women’s voices are criticized as shrill or whiny, Beard asks, “how can we make ourselves more aware about the processes and prejudices that make us not listen to her.” I can’t say that Beard goes very far towards providing answers, but that’s not what books are meant to do. They’re meant to make you think, and Women & Power certainly does that.

The problem with Beard’s text is that, rather than deconstruct dichotomies, in writing about women and power, she often generalizes and universalizes gender and power:

We have no template for what a powerful woman looks like, except that she looks rather like a man. The regulation trouser suits, or at least the trousers, worn by so many Western female political leaders, from Angela Merkel to Hillary Clinton, may be convenient and practical; they may be a signal of the refusal to become a clothes horse, which is the fate of so many political wives; but they are also a simple tactic–by lowering the timbre of the voice–to make the female appear more male, to fit the part of power.

Beard fails to acknowledge a spectrum of gender presentation: men are masculine, women are feminine; and her logic here seems simple: women have high-pitched voices, men have lower tones. There’s no recognition of the fact that women are taught to speak with higher and softer voices in order to perform hyperfemininity. What if women in positions of power or who seek power are not taking on male characteristics, but instead, throwing off restrictive and artificial feminine characteristics? Just maybe women aren’t choosing pantsuits because they want to look like men, but these clothes are more “practical and convenient” because feminine clothes are so designed to restrain women’s bodies in the same way that culture restrains their voices. Even though they wear pantsuits, Merkel and Clinton are still pressured to appear feminine–high healed shoes are neither practical nor comfortable, but female politicians can’t be seen in sensible shoes. That would be too masculine, even queer.

But Beard leaves no room for female masculinity or difference. Her only gesture towards gender non-conformity or non-heteronormative roles is in referencing a Twitter troll that assumed Beard was a lesbian until he found out she was married to a man. If a writer is going to approach the topic of gender, I would prefer less of a discussion about women’s clothing–we don’t discuss male politicians’ clothes–and instead have a longer book with a more nuanced examination of gender.

Women & Power is a short and generative read, and it’s well worth your time. For readers claiming there’s nothing new here, that’s precisely Beard’s point–women have been violently silenced since time immemorial. If there’s nothing “new” to be said, should we stop saying anything? Absolutely not. This criticism reads like yet another attempt to silence women. In my view, Beard’s sharp historicization does add a great deal of value to the conversation.