Isabella Stewart Gardner was a consummate

collector of photographs, books, priceless works of art, and famous friends. Henry James loosely (and not entirely favorably) based at least a couple of characters on her. John Singer Sargent painted her, so did Anders Zorn. Whistler was also a friend, as was Vernon Lee. If you really want to feel as though you’re listening on all the gossip of late nineteenth-century Venice, read Gondola Days, a collection of essays about the social circle of the Palazzo Barbaro.

She and her husband Jack began travelling extensively after the death of their infant son. Seeing the world was a way of escaping memories of the past, as well as the conservative society of Boston. With the help of Bernard Berenson, one of the most influential art historians of the late nineteenth century, the Gardners began acquiring works by the old masters of European art and shipping them to Boston.  Jack passed away in 1898, but five years later, the Isabella Stewart Gardner Museum opened near Fenway. The next year, 1904, Henry James published The Golden Bowl which features a character named Adam Verver, a wealthy and controversial American who buys up all the art in Europe to open his own museum in “American City.” And nearly 90 years later, the Isabella Stewart Gardner Museum became the site of the most notorious art heist in history. 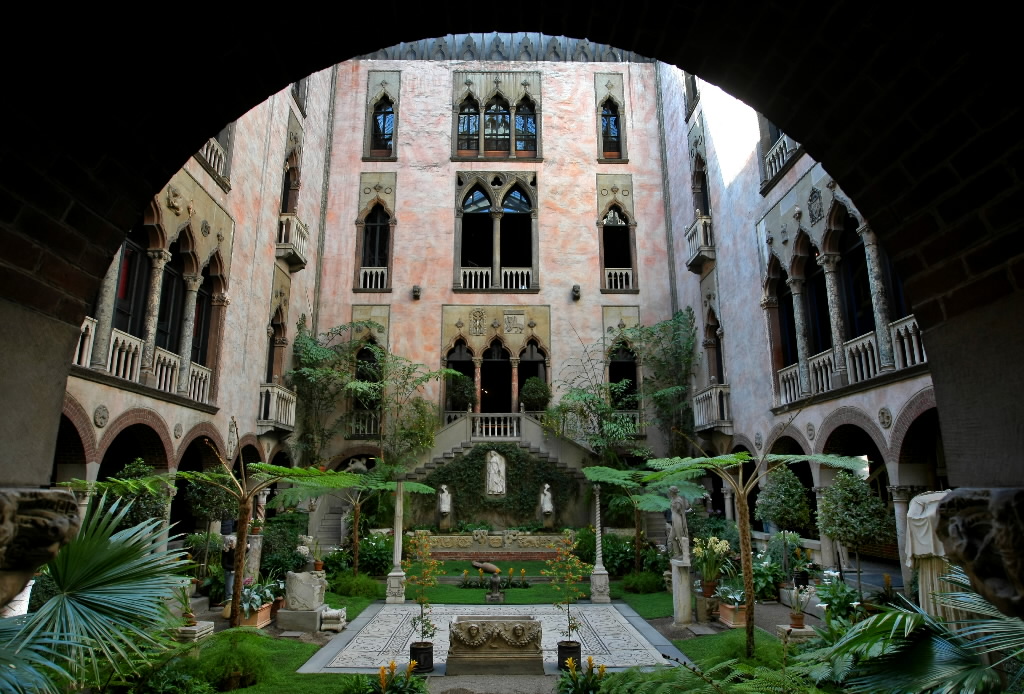 Venetian Courtyard of the Gardner Museum

Gardner’s museum continues to attract visitors to its priceless exhibits, but when I visited the museum last August, I went to see a collection that very few people even known about and even fewer get to see. Throughout Mrs. Gardner’s travels, she collected postcards of cities she visited and art she saw, pasting them into her scrapbook, and scrawling the date, her itinerary, and occasionally quotes from poets in the margins. I looked through her scrapbooks and read a few of her visitor’s books, which is filled with notes, drawings, and even scraps of sheet music from some of the most notable figures of the nineteenth century. Many of these scrapbooks have been digitized and as I finish the final chapter of my dissertation, I have spent the last week meticulously looking at every page, collecting data and finding patterns.

Before I left, I purchased a postcard to add to my own collection. This photograph of the Gardners–Isabella is the woman in the gondola on the right–in Venice now hangs above my desk at home.

This entry was posted in Dissertation, Ephemera. Bookmark the permalink.