Posted on September 5, 2016 by LoriBrister 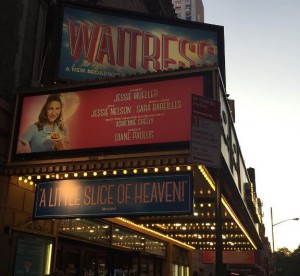 I might have mentioned before that my partner is kind of the best at surprises, especially birthday surprises. I mean, she can’t keep them to save her life, but, boy, can she plan them. That flying lesson I mentioned before? That was my gift last year. The year before that, it was a trip to Vegas to see Céline Dion. That one didn’t turn out quite as planned, but it’s the thought, right?

This year’s birthday surprise was a trip to New York to see Waitress, the Tony-nominated musical written by Sara Bareilles. I hadn’t consciously planned to see the show anytime soon, but I had somehow subconsciously avoided listening to the soundtrack or watching the the 2007 Keri Russell movie because I didn’t want to spoil the story.

It was worth the wait. The music, the cast, the smell of pie that permeates the entire show–it was all fantastic.

No pressure for next year, honey.

She Used to Be Mine – Jessie Meuller

Not to give too much away, but this is the big ballad in the show. The protagonist, Jenna (played by Jessie Meuller) has recently found out that she’s pregnant. You’ll get that from the torso-grabbing, but it’s important context for the song. If you want to write a compare and contrast essay, you can also listen to Sara Bareilles’s version. I have listened to both versions a million times this month, and I refuse to choose.

She Use to Be Mine – Sara Bareilles 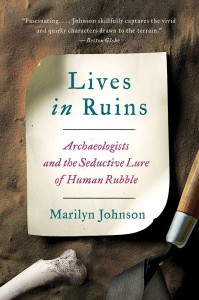 The recurring theme of the book is that archaeology isn’t as glamorous as it is in the movies. There’s no fame, fortune, or glory. Johnson reminds us over and over again that there are few jobs for archaeologists and very little pay for those that do find jobs. So basically, being and archaeologist is like having a PhD in English except you get to travel.

Johnson’s book is well-researched, well-written, and she went on quite a lot of digs and spent time with people who have broken their backs for decades so that we could find and preserve sites.

Crazy Ex Girlfriend
This show is delightful. You might have noticed (see above) that I really love musicals, and this show has a lot of great numbers like Where’s the Bathroom? and Sexy Getting Ready Song. The show’s not afraid to go to really uncomfortable places or show bodies that look like ordinary bodies. 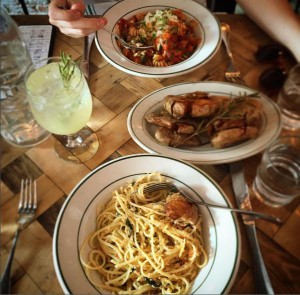 Best meal I’ve had out in a long time–Rosemary’s in Greenwich Village. It’s my new favorite place in NYC. If you go, check out the rooftop garden.