July has flown by–see what I did there?–and it’s hard to believe it’s been a month since the Smithsonian Air and Space Museum hosted an all-night party to celebrate their 40th anniversary. The photo above, of Lindbergh’s Spirit of St. Louis was taken at about 4 o’clock in the morning, after a two-hour, fast-paced scavenger hunt. It was a great way to explore the collection, play a game, and learn a few things all at the same time. I was surprised to see so many families there with small children, but it’s just the sort of thing my parents would have done.

I grew up in the middle of nowhere, where every star in the sky seemed visible. Twice a year for the Perseid meteor shower in August and the Leonids in November, we’d all go to bed early and wake up at 2 or 3 am. We’d make hamburgers or sandwiches, drive out to a nearby field and have a picnic on top of our old van while we watched the meteors zooming across the sky. My parents knew how to do fun, magical things that most parents would probably disapprove of.

Air and Space is one of my favorite museums because it combines my love and nostalgia for stars with my all-out geekery for airplanes. I’ve been obsessed with all things Amelia Earhart (except Hillary Swank movies) for as long as I can remember, and still dream of someday getting a pilot’s license. Last year for my birthday, my partner bought me a single flying lesson. My instructor, one of the coolest humans I’ve ever met, said I was a natural. Yes, I know he says that to all his students, but he let me actually take the plane off, from sitting still on the runway to G-force climbs over Maryland. That was one of the best days of my life.

But back to this year.

There were a few songs I listened to on repeat in July, including Missy Elliot’s Get Ur Freak On, thanks to the amazing “Carpool Karaoke” with Michelle Obama. And then there is this earworm:

Books
It’s dangerous to even start writing about what I’ve read in the past month. I often fantasize about doing Brainpickings-esque reviews after I finish books, but let’s just assume that for right now I don’t have the time, and I’ll never do it half as well as Maria Popova anyway. 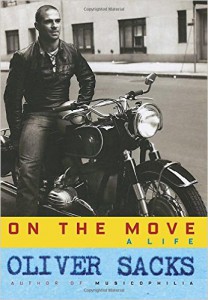 If you’re looking for a book that makes you say, “Man, I haven’t lived!” Oliver Sacks’s autobiography On the Move is just the thing. First of all, it has this picture of hunky Oliver Sacks straddling a motorcycle and looking Cool AF on the cover.

It’s difficult to say which is more impressive, Sacks’s long list of neurological discoveries or his prolific writing career. He was, as he writes in the On the Move, “a storyteller, for better and for worse.”  He wrote constantly, obsessively, filling thousands of notebooks and journals over the course of his life, and even more patient files. Beyond his most famous medical works, Awakenings,  Musicophilia, Migraine, Hallucinations, The Man that Mistook His Wife for Hat, An Anthropologist on Mars, etc., Sacks also wrote for the The New York Review of Books, travel articles for National Geographic, and a wide range of publications on an even wider range of topics.

Sacks wrote simply because he loved writing: “The act of writing, when it goes well, gives me a pleasure, a joy, unlike any other. It takes me to another place — irrespective of my subject — where I am totally absorbed and oblivious to distracting thoughts, worries, preoccupations, or indeed the passage of time. In those rare, heavenly states of mind, I may write nonstop until I can no longer see the paper. Only then do I realize that evening has come and that I have been writing all day.” I wonder, as I read this passage, if I have ever enjoyed writing that much. So often it feels more like a brutal compulsion.

In July, I also read Sara Bareilles’s charming autobiography Sounds Like Me: My Life (So Far) in Song and finally finished (after a long, emotional break) Ta-Nehisi Coates’s Between the World and Me. For weeks, I’ve tried really hard to put words to all of my feelings and thoughts about Coates’s book, which is moving, heartbreaking, infuriating, angstful, beautiful, important. I can’t quite get there and doubt I ever will. Do yourself a favor and read it if you haven’t.

Me and everyone else on earth, right?

When I first started Stranger Things, I wasn’t really sure about it. I watched the first few minutes during a lunch break, half distracted by a bowl of soup, and it just felt like it was trying so hard to be Spielberg and trying even harder to appeal to the nostalgia of 35 year old men. I just didn’t think I could get into it. Then everyone started talking about it, and well, you know what a follower I am… Suddenly, I couldn’t stop watching it, and I still can’t stop thinking about it.

Click image for a review of Cook Serve Delicious.

Speaking of food, my life has been forever changed. At the urging of and with a coupon from a close friend, I signed up for Blue Apron. Now you can find me most any day in your local park with a megaphone and pamphlets.

It’s $60 per week for 3 meals for 2 people. (Family-sized plans are also available.) You put in your dietary restrictions (my partner/ sous-chef is a pescatarian), and they send you three meals with recipes and fresh ingredients. My box arrives every Friday afternoon, but unwrapping it feels like Christmas morning. All of the little ingredients, like perfectly proportioned pinches of spice and tiny table-spoon-sized bottles of vinegar, come in small “knickknack” paper bags, which I prefer to think of as stockings. My brother-in-law said, “They tell you what to eat and when to eat it? And it changed your life? That’s called a cult.” Who’s part of the cult now, buddy?

So I spent most of July ‘Gramming my Apron. I’ll leave you with a few of my favorite meals.

Summer Squash Quesadillas with Corn on the Cob with Lime Crema