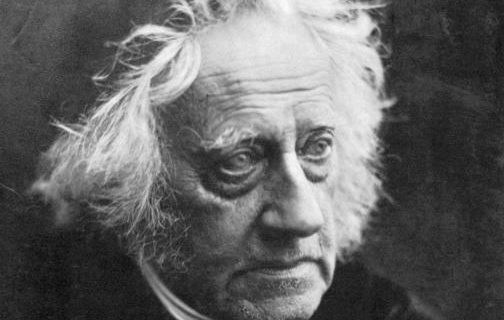 In one photo, he looks far into the distance, blurry-eyed and pensive. A velvet cape drapes around his shoulders so that each fold catches the light. His white hair, perpetually wild, sweeps up dramatically over his cap as if blown by sea air.  In another photo, he stares right into the lens, almost accusatorily. His eyebrows are as wily and unruly as his hair which, now that his cap is removed, stands around his head like a halo. In another photo, almost out of focus, his eyes gaze upwards, almost fearful, of the heavens he knew so well.

Even as a young man, long before he was knighted and his face weathered, John Herschel was recognized for his genius. In 1813, he graduated from Cambridge as Senior Wrangler, a designation given to the highest scoring student in mathematics. Like many fresh graduates, he went straight into the family business, and in Herschel’s case, that meant astronomy. His father, William Herschel, discovered both Uranus and infrared radiation, and his aunt Caroline was the first woman–and still only one of three–to be awarded the Gold Medal of the Royal Astronomical Society for her discovery of the Herschel-Rigollet Comet and the dwarf galaxy now known as Messier 110. Charles Messier had drawn the galaxy which bears his name in 1773, but he didn’t name it, include it among his discoveries, or otherwise reference it in his notes. Ten years later, Caroline discovered the galaxy independently, numbering it among her findings and documenting her observations. It wasn’t until 1967 that it was named after Messier, nominally and effectively erasing Caroline Herschel from its history.

But the influence and fame of Sir John Herschel would eventually outshine both father and aunt. He rose to prominence quickly, winning the Royal Astronomical Society’s Gold Medal twice, in 1826 and 1836. He also periodically served as the society’s president. In 1831, he was knighted by William IV for his contributions to astronomy. Like a true Victorian polymath, Herschel also made significant contributions to other fields, including chemistry and photography.

In 1819, he experimented with a chemical called hyposulphite of soda, which, when applied to light-sensitive substances like silver salts, protected them from light exposure. When Louis Daguerre and Henry Fox Talbot discovered photography almost simultaneously, Herschel wrote to both men that his discovery of hyposulphite could potentially “fix” their images, which were already beginning to fade, especially in the case of Talbot’s calotypes. Talbot used light-sensitized paper, which was more susceptible to fading than Daguerre’s glass plates. Without a compound to de-sensitize the paper to light, calotypes faded significantly every time they were viewed. His earliest images faded entirely, so Talbot was enthusiastic about Herschel’s discovery, and the two corresponded about their progress.

Over the next few years, Herschel continued developing his own photographic process, using light-sensitive iron salts, specifically ammonium iron citrate, along with potassium ferrycide. The reaction of the two chemicals, together with light, turned the paper blue. Herschel would place plant matter, or notes and diagrams written on tissue-thin paper, over chemically-treated paper. The plants or ink protected the treated paper from light, creating a reverse shadow image, which Herschel called a “negative,” as opposed to “positive” images, like Daguerreotypes. In fact, we owe much of our familiar terminology to Herschel. At the time, these images were commonly called “sun-pictures” or “photogeny”—literary, produced by light—but Herschel, who thought and spoke as a scientist, used a Latin phrase meaning light-writing, or “photo-graph.” He referred to his own method as “cyanotype photography,” in reference to the blue pigmentation.

While his terminology has survived for nearly two centuries, his technology did not fare as well in the face of more sophisticated methods. Glass-plate Daguerreotypes were celebrated for their clarity and ability to capture minute details, while Talbot’s paper-based process was easier and cheaper, though the paper images were not as crisply defined. Later in the nineteenth century, cyanotypes became more advanced and commercially viable, enjoying a brief popularity among photographers in the 1870s. However, Herschel’s process, which he envisaged as a means of reproducing notes and diagrams, found its own unique application as the standard, until very recently, for producing architectural drawings. Even with the advent of computer-rendered images, building plans are still commonly known as blueprints.

Herschel’s experiments with photography began relatively early, and there’s a good chance that he would have beaten both Talbot and Daguerre to the punch, if not for his intense dedication to astronomical research. In the mid-1830s, when Talbot and Daguerre took their first photographs, Herschel was at Table Mountain on the Cape of Good Hope, then a protectorate of Great Britain. He relocated his entire family to South Africa to spend four years observing the southern sky, contributing a significant body of astronomical research for which he received a Baronetcy.

While in South Africa, Herschel met a young English woman Julia Pettle, who was visiting the Cape of Good Hope while recovering from illness. She listened enraptured to Herschel’s description of his own nascent experiments with light-drawing, and, later, he wrote to her about Talbot and Daguerre’s inventions. By 1842, Julia Pettle had returned to India with her new husband, Charles Hay Cameron, when Herschel sent her two dozen early photographs, which according to Julian Cox and Colin Ford, were the first photographs that Julia Margaret Cameron ever saw.

Within two decades, the technology had advanced so rapidly that photography was an integral part of Victorian culture, indelibly changing the way England thought about art, literature, and the concept of reality itself. Photography was also more accessible and affordable for amateurs and professionals alike. In 1863, Cameron’s daughter and son-in-law gave her a camera as a gift, and she began taking photographs of everyone in her family, including her niece Julia Jackson, whose daughter, Virginia Woolf, would later use these photographs as inspiration for Mrs. Ramsay in To the Lighthouse.  Another photo, of Thomas Carlyle, may have been the inspiration for Augustus Carmichael, the novel’s dignified and contemplative poet.

Cameron photographed many people from her impressive social circle–not only Carlyle, but also Charles Dickens, Alfred, Lord Tennyson, and many members of the Pre-Raphaelite Brotherhood. Cameron was so conscious of her role in capturing the images of these great men (and they were mostly men), that she described her photographs as “almost the embodiment of a prayer” (Cox, Ford 66).

In 1867, Cameron finally had the chance to photograph the one notable friend who had long eluded her–Sir John Herschel. He had promised her that he’d never sit for another photographer, but she still had to convince him. Even after all those years, she remained in awe of him, and she approached the task with religious reverence. Cameron wrote, “He was to me a Teacher and a High Priest. From my earliest girlhood I had loved and honored him, and it was after a friendship of 31 years’ duration that the high task of giving his portrait to the nation  was allotted to me” (Cox, Ford 66). For his convenience, she moved her entire photographic equipment, including delicate processing chemicals, from her home on the Isle of Wight to his estate in Kent. On a cool April day, Cameron looked through the camera to gauge the light. Perhaps she crossed the floor to carefully rearrange the folds of his cloak, or remove his cap, before returning to the camera. Then she disappeared beneath the dark veil of the camera, squinted into the keyhole, and squeezed the rubber trigger.