Around the turn of the eighteenth century, a physician named Sir Hans Sloane began collecting interesting objects from his travels or buying them from other collectors. He amassed an important collection of antiques books and prints, ancient Egyptian artifacts, unusual fossils and animal skeletons, rare coins, and other items for his Cabinet of Curiosities, as gentlemen of the Enlightenment often called their hobby of collecting. At Sloane’s death in 1751, he bequeathed more than 70,000 items to found the British Museum. In a similar origin story, the Ashmolean Museum at Oxford University began as a Cabinet of Curiosities collected by Elias Ashmole.

I’ve never been one for collecting, aside from books, and even there, I can’t call myself a book collector. But I am an inveterate list-maker, which I realize sets me apart from absolutely no one, though perhaps my level of obsession makes me a curiosity, in a way. I collect notebooks full of lists, with different notebooks for different lists because I don’t want my inspiring “List of places I want to visit someday” to be tainted by its proximity to “List of unpleasant things I have to do today,” like wrangle with my insurance company or contest extra cable charges. I’ve written before about my notebook of favorite cheeses, and I have one for favorite wines. I also collect a wide variety of apps, websites, and specialty items to track my lists. At work, I use Freedcamp for project management, and for downtime, I use Goodreads to keep my brain stimulated.

Not surprisingly, I am both drawn to and appalled by that most ubiquitous of internet genres, the listicle. I avoid any clickbait, Buzzfeedy “top ten” articles. Number 7 never shocks me, and I always feel bad about myself for falling for it. But I love anyone’s list of books, be it favorite books or recently read books (see Goodreads above), and most music-related lists, even for genres I don’t particularly like. And if there’s one thing I cannot get enough of it’s the round-up, where people share their favorite random things of the week, month, or year. One of my favorite food and travel blogs, The Funnelogy Channel, does a monthly “FunnelWorthy List,” in which bloggers Gabriella and Nicolas share the best recipes, recent books, favorite articles, or stuff they’ve collected from around the internet. I look forward to their new list every month.

Fans of NPR’s Pop Culture Happy Hour podcast will be familiar with the “What’s Making Us Happy” segment, in which the panelists close the show with a discussion of their favorite songs, books, tv shows, news, etc. from the week. That’s always been my favorite segment.

As life has an unfaltering way of filling with stress and anxiety, I’m increasingly taken with the idea that little things, like a song you can’t stop singing or a new movie you can’t wait to see, can make us happy. And when things get tough, and the world seems grim, it’s more important than ever to concentrate on those things, big or small, that make up happiness. So without any rhyme or reason, here’s a list of things I’ve collected over the
past month, the things that make me happy and the things that make me curious.

Music
So here’s some music from Monika. I dare you not to dance.

I’ve read a lot of Susan Sontag this year, and she’s probably the writer that I not only read the most, but also engage with the most–my marginalia covers nearly as much of the page as her text. The Complete Rolling Stone Interview by Jonathan Cott has been one of my favorites because it’s so meandering and conversational. Sontag and Cott cover a lot of ground, and on points where Sontag tends to grow vague or esoteric, Cott pushes her to define her position or explain her often dismissive comments.

Two other books I really enjoyed reading this month was Eric Larson’s Dead Wake and Margalit Fox’s The Riddle of the Labyrinth: The Quest to Crack an Ancient Code. Larson’s research is always thorough, and his narrative is often as poetic and engaging as a novelist’s. Fox’s book, though a quick and interesting read, certainly isn’t the best writing, though she’s the obituary writer for the New York Times. Most of the information about the cracking of Linear B, the oldest written language in Europe, seems taken directly from A Very English Genius, the BBC’s documentary about Michael Ventris, the man who finally deciphered Linear B. However, one thing Fox adds that nearly every other historian leaves out (unsurprisingly) is the central importance of Alice Kober, the woman whose work laid the foundation for Ventris’s discovery. She is the Rosalind Franklin of Linear B, and, like Franklin, may have made the crucial discovery herself, but she passed away from cancer at a young age. It’s an easy, fast, and fascinating read, but doesn’t stack up against Lesley Adkins’s The Keys of Egypt: The Race to Crack the Hieroglyph Code, upon which Riddle seems to be modeled.

Currently reading, um, a few things, but mostly this.

Food
I probably cooked pasta with fried lemon and chili flakes five times in June. It’s bright and refreshing, with just the right balance of heat, like summer should be. 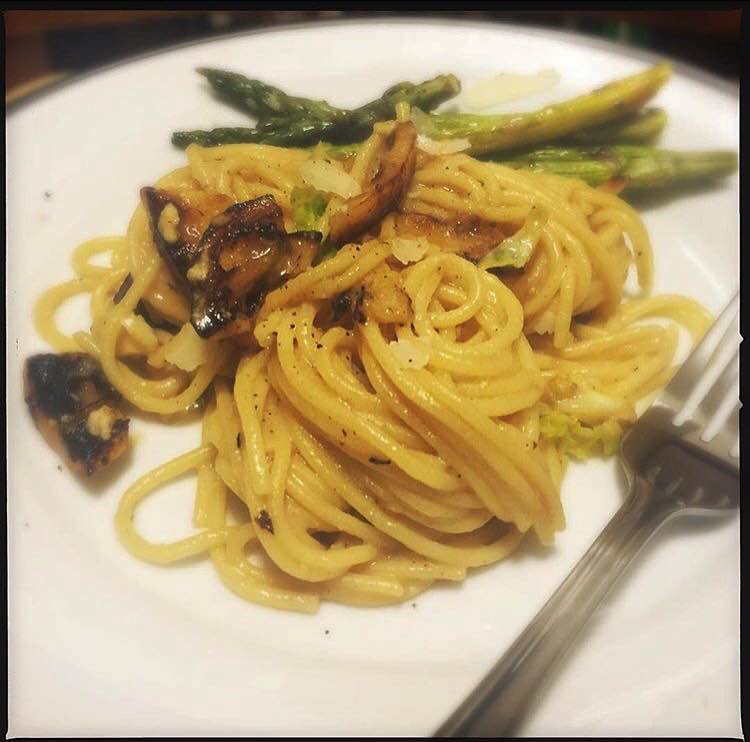 TV
I’ve been pretty disappointed in TV this year. All of the shows that I looked forward to for a year–Orange is the New Black, Kimmy Schmitt, Chef’s Table, Grace and Frankie–were all just meh. There were great episodes of each (except maybe G&F), but on a whole, the latest season of these shows have been collectively humdrum. I did really enjoy The Night Manager, which I’ve heard got mixed reviews. Also, I burned through The Sixties (don’t let the CNN-affiliation scare you away) on Netflix.

Interwebs/Tech
Fun app recommendation: Garden Answers lets you take pictures of plants, and then it tells you what they are. It’s like having a gramma in your pocket. This is how I know that the beautiful and sweet smelling flower I saw in Georgetown is, unfortunately, named “Confederate Jasmine.”