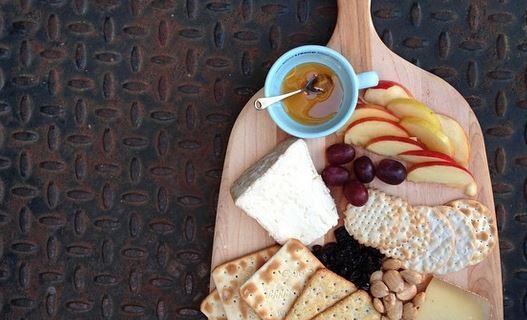 It tastes like a sweaty farmyard animal in my mouth, but in a good way.

Sophia is a goat’s milk cheese produced by Indiana’s Capriole Farm. It looks like a small,wrinkled brick of mold, but when I cut into its soft center, Sophia is bright white except for the thin, bluish layer of vegetable ash running through it. Since it’s a fresh cheese, aged for only about a week, it has a fairly mild flavor, much like the more widely available (and my favorite) Humboldt Fog. But the longer it sits in the fridge or at the cheese shop, the more pungent it becomes. I take another thin slice, smearing it across a cracker until the line of ash loses its definition. I take a bite, pressing the cheese against the roof of my mouth, exhaling. There it is again: the distinct flavor of goat. When I was an undergrad I did a semester in France and visited a goat farm to see how cheese was made. They’re such docile, friendly creatures, like goofier-looking dogs. With every taste of Sophia, I’m back on that farm.

Harbison is a cow’s milk cheese from Vermont. You can’t cut it into slices or wedges because it’s too runny, so you can rarely buy it in small pieces. Instead, it’s usually sold in a round wooden box that you get to unwrap like a present. The surface of Harbison is straw-colored with a vaguely woven texture and a thin dusting of white mold. It’s like looking at a frosted mini-wheat under a magnifying glass. To cut into Harbison, you have to slide a cheese wire or small knife under the surface, peeling it back. The center looks like white queso, and is just as molten. You’re supposed to serve it with a spoon, or, amongst friends, just dip your bread right into it. My partner managed to find a half-wheel at a local cheese shop. It had been chilled and wrapped, disguising the runny center. When we unwrapped it, it spilled onto the plate, the fragile outer shell collapsing onto itself, and after the first taste, we abandoned the bread idea altogether and scooped it up with our fingers.

In order to hold Harbison’s shape, the skilled artisans of Jasper Hill Creamery in Vermont wrap a thin strip of wet spruce around the edge, then leave it to age for 6 to 13 weeks. During the aging process (affinage), the oozing cream absorbs the flavor of the spruce, so when Harbison touches your tongue, it tastes like the memory of a childhood Christmas.

According to Max McCalman, author of Mastering Cheese: Lessons in Connoisseurship from a Maître Fromager, the best way to describe cheese is through simile. Cheese tastes like a barnyard, like feet, like any number of things that sound disgusting yet somehow are delicious…like heaven. But I wanted more than vague metaphor. I wanted specificity. I wanted to swirl cheese around my mouth like a sip of wine, catching hints of honey and notes of thyme. I wanted a vocabulary.

So I began June with a simple goal: to learn more about cheese, to learn to appreciate it, to understand it, and, perhaps most importantly, to talk about it. There’s a great documentary called Somm, about people training for the Master Sommelier test. There’s a lot of swishing and spitting, as you would expect, but also a lot of note cards and maps. The sommeliers interviewed talk about the nuances of a certain vintage from a particular vineyard, noting its blackberry or tobacco undertones, or, more bizarrely, describing the aroma as “a freshly opened can of tennis balls” or “a garden hose cut in half.” That’s what I wanted to learn to do with cheese: to abandon the fear of absurdity and embrace pretension in all its glory.

As it turns out, there are quite a few easy identifiers when describing the taste, texture, and appearance of cheese. The first step was to get a cheese diary. One of our favorite local cheese shops, Righteous Cheese in Union Market, sells copies of the 33 Pieces of Cheese, which is kind of adorable, if a little precious. It has spaces for the cheese name, creamery, origin, rind (washed, bloomy, or natural), milk source, texture, and a flavor wheel. Each point on the flavor wheel marks a characteristic–sweet, grassy, caramel, nutty, stinky, lactic, crystalline, etc.–with 0 at the center of the wheel and 5 on the outer edge. Right off the bat, we went from knowing next to nothing about cheese, to having sixteen adjectives and a method of comparison. Once the dots are connected, the flavor profile forms a shape, and we began to notice patterns. Our least favorite cheeses, like Grayson, an unpasteurized cow’s milk, and a particularly over-ripened Pierre Robert, formed a perfect star, spiking the scales at salty, stinky, sharp, and grassy. Our favorite cheeses, tended to form little shapes, like an angel, a fighter jet, or a terrier.

The flavor of an individual cheese is influenced by the type of milk, what the animal ate, the moisture in the air, and the particular strains of bacteria native to the region. This is all part of the cheese’s terroir, a concept that is as important to cheese as it is to wine making. Even a change in season can produce a different flavor. For Alpine cheeses, cows have to graze on heartier plants with less moisture in the winter, while summer grazing includes more food supply to produce a sweeter cream. The formula for some cheese varieties are so specific that creameries use only morning milkings, rather than evening milkings, or vice versa. Every tiny factor makes a difference.

The rule of thumb is variety–use different milk types and textures. If you’re going with three cheeses, try to get one of each: goat’s milk, sheep’s milk, cow’s milk. That’s typically the order in which you’d want to taste the cheese as well. The mildest and freshest cheeses tend to be made from goat’s milk, while cow’s milk cheeses tend to be the strongest flavors. This is a generalization, not a hard and fast rule. You can also find sweet cow’s milk cheese or goat’s milk cheese that’s so stinky it’ll burn your nose. The trick is in the order you taste them. If you try the sharper, more robust cheeses first, your tastebuds aren’t alert to the nuances of the milder cheeses. If you order a cheeseboard in a restaurant, they should be arranged mild to strong, running left to right. Blues are always last.

Taste each cheese twice, first by itself, then with a cracker or some other accompaniment or condiment. And it doesn’t have to be a cracker or a piece of bread. Certain pairings bring out more subtle notes, and often the cheese will taste drastically different with the right pairings. Chèvre and Brie are great with apple or pear. Triple crèmes work really well with honey. Cheddars are amazing with mustard. I recommend Flory’s Truckle Cheddar with a sweet-spicy brown mustard. As Remmy would put it, “Discoveries to be made!”

How to Do It on the Cheap

Unlike wine, whiskey, and other luxury items, learning about cheese doesn’t have to be expensive. Most cheese shops, even Whole Foods, have some kind of remainder bin where you can find tiny wedges of leftover cheese for $2-4. For less than $10 you can put together a decent cheeseboard. You can also walk into a cheese store and say “Can I sample the Gouda?” They let you do that. Free cheese, people. Free. $5 will buy a cheese tasting diary, or make one yourself. Either way, take notes. Data collection is your friend. It helps you remember what you liked and didn’t, and your palate actually does become more refined.

The number one tip for learning about cheese is just trying it. And remembering that taste is completely objective. Nobody can tell you which cheese tastes good to you. But if you want to follow me into the far regions of obsession, there are several completely free resources that I’d recommend. YouTube has an Australian series Channel Cheese, which includes visits to a lot of creameries and fromageries. There are also behind the scenes videos from Cypress Grove, makers of Humboldt Fog. For a super nerdy listening experience, Gastropod, a podcast about the history and science of food, has an episode which delves into how cheese changed our DNA (Humans used to be lactose intolerant, but I’ll let them tell you what happened next.), what’s wrong with mass production and those radio-active-orange blocks of byproduct (Hint: it’s not cheese), and lots of fun stories about bacteria.

For going really deep into the subject, McCalman’s Mastering Cheese has more information than I could even get through, so I’d recommend jumping around in the book to sections that interest you. I checked it out from the local public library. They let you read books for free too.

If you’ve got a special occasion coming up, find a restaurant that serves a curated cheeseboard. If you’re in DC, Sona Creamery and Wine Bar offers one of the best selections by a knowledgeable and friendly staff. They also include a pat of house-made butter sprinkled with salty pop-rocks. Yes, pop-rocks. It’s something you never knew your grown-up mouth wanted. A variety of accompaniments are included with the cheeseboard, but wine pairings are extra. But don’t get too attached, the selection changes every month, but you can probably still buy your favorites from their shop. For a bit more of a splurge, they offer cheese-making classes and, coming up in August, a cheese tour of Ireland. No joke. A girl can dream, right?

After a month of oh-so-serious cheese study, I think finally earned some street cred among cheese mongers, and I sometimes hear the word affinage fly out of my mouth without the least hint of irony. Of all of the monthly experiments that I’ve done, this has definitely been the tastiest, and the one I’m least likely to give up any time soon.